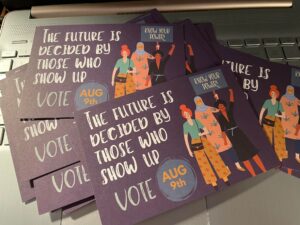 Wisconsin has a primary election on August 9th. How much do people know about the candidates and issues for this election? Local local news sources offer little of value. This article tries to help people in Douglas County and NW Wisconsin get the information they need to be informed voters.

To begin with, people in Douglas County need to be aware that their Wisconsin Assembly district has changed. The latest version of gerrymandering has moved almost half the county from the 73rd into the 74th district. These people are in with Bayfield,  Ashland, Iron and Price counties. Many people are not aware of these changes. Not recognizing the candidates on the ballot, they are stuck with guessing or not voting for anyone.  In other words, their vote has been “suppressed,” which is one goal of gerrymandering.

Voters in Highland, Hawthorne, Bennett, Gordon, Wascott, and Solon Springs townships and the Village of Solon Springs are now lumped into the 74th district. Cloverland and Brule were moved back to the 73rd district from the 74th. Confusing? Making things confusing and more difficult for voters is typical of gerrymandering

Another change in the 73rd district is that Rep. Nick Milroy is not running again. The candidates running to replace Nick have been announced, but only limited information on these candidates are available from local news sources. Voters have to do their own digging on the Internet

The Democratic candidate is Laura Gapske. She is on the Superior School board (2017 to now). She has 18 years of experience in social work specifically in domestic and sexual abuse. Currently she is Director of Programs at Men As Peacemakers in Duluth. She is unopposed in the primary. Her campaign website (gapskeforassembly.com) indicates she is a progressive Democrat.

Angie Sapik is one of two Republican candidates. This is her first run for office. She is employed by her family’s wholesale produce company as an onion sales person. There is no information on her educational background. Her campaign Facebook page indicates she is a typical right wing Republican although she claims to be a “moderate” (see  facebook.com/angiesapikassembly).

Scott Luostari is the other Republican candidate. His website (luostariforassembly.com) says he is a farmer and small construction business owner. He has been on the county board for a few years. There is no information anywhere about his positions on issues, why he is running or what he would try to accomplish.

In the Douglas County sheriff’s race there are three candidates running as Democrats. Douglas County Detective Matt Izzard and Deputy Brian Witt are both active employees of the Sheriffs Department. Mark Liebaert has prior police work experience and is the current Douglas County Board Chairman. I found no information any of these candidates positions on policing issues or their vision for the department. Liebaert does stress his county budget experience as being important.

There is one curious bit of anecdotal information that voters might want to consider. Observing the placement of yard signs for Izzard and Witt it appears their running as Democrats is a tactical move rather than a statement of political philosophy. Both candidates yard signs are often located with signs for other Republican candidates or known Trump supporters. Are they lying to the public? You can decide.

On the county board Liebaert was not known as a progressive Democrat. The bottom line is this election is one more where voters have no real choices. Welcome to democracy in America.

In the Wisconsin 25th Senate primary both candidates are unopposed. Kelly Westlund is a progressive Democrat and Romaine Quinn is running as a moderate Republican. There is no choice for voters to make at this time, but their differences will be important in November.

There are some interesting and strategic primary choices for U.S. Senate and the 7th  Congressional district races. Voters have an opportunity to vote against Sen. Ron Johnson and Rep. Tom Tiffany in the primary. Wisconsin has an “open” primary and any voter can vote  for any party’s candidates (you can only vote for one party however). Both Johnson and Tiffany have moderate Republican candidates running against them. Given that primary elections have lower voter turn out it is possible that Democrats and independents could help unseat these two dangerously extreme incumbents by voting Republican in the primary.

You may think this is dirty politics but it is entirely legal. Both parties have used this tactic. One reason the current Republican party is so crazy is all moderates have been “primaried” and extirpated from the party. Given that partisan gerrymandering has effectively disenfranchised many Democrats their only real choice is to vote for moderate Republicans in the primary.

Republican David Kunelius is challenging Rep. Tom Tiffany for the 7the Congressional seat. He is a retired teacher with 25 years experience. He is running because he is, “…absolutely fed up with the behavior of the politicians in Washington; rather than discuss the issues, debate policies, or govern, they engage in name-calling, fear-mongering, and sensationalism…I think that politics should be about competing ideas, intelligent discourse, and compromise…together we can Make America Nice Again.”

On issues he is a moderate Republican (see kuneliusforwi7.com). He would support tax cuts and gun owners but understands we need fairness and adequate funding of education and other government functions. He supports a women’s right to make reproductive decisions. I would not vote from him in the general election but will in the primary. He is much better than Tiffany.

David Schroeder is running against Ron Johnson in the Republican primary. He is also a former educator and a Republican who believes the Trump “cult of personality” is not what the Republican party should be. He appears to be an old school “liberal” Republican. His priorities would be “saving our democracy” with campaign finance reform and protecting voting rights. As a former poll worker, he rejects the claims of voter fraud. On a PBS interview (google PBS “Meet Wisconsin 2022 US Senate Candidate David Schroeder”) he says, it’s time for Republicans to take their dang party back. Come on guys. Let’s go.”