Ukraine: An Opportunity for Peace 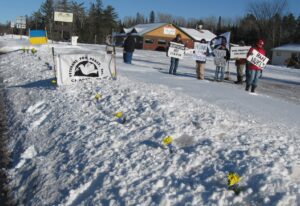 “War is always a choice and it is always a bad choice.” World Beyond War in their publication    “A Global Security System: An Alternative to War.”

The war in Ukraine is both a wake up call about the folly of war and rare opportunity to move toward a more peaceful world.

Reading the stories of Ukrainians, of all ages and backgrounds, volunteering to fight may seem heroic. We all want to cheer on the brave, self-sacrifice of ordinary citizens standing up against an invader. But this may be more Hollywood fantasy than a rational way to oppose the invasion.

We all want to help by giving Ukraine weapons and supplies of war. But this is irrational and misguided thinking. Our support is more likely to prolong the conflict and kill more Ukrainians than to result in the defeat of Russia’s forces.

Violence – no matter who commits it or for what purpose – only exacerbates conflicts, killing innocent people, shattering countries, destroying local economies, creating hardship and suffering. Seldom is anything positive achieved. More often the underlying causes of the conflict are left to fester for decades into the future. The spread of terrorism, the decades of killing in Israel and Palestine, the Pakistan-India conflicts over Kashmir, and the wars in Afghanistan, Yemen, and Syria are all current examples of the failures of war to achieve national objectives of any kind.

We tend to think there are only two options when facing a bully or an aggressor nation –  fight or submit. But there are other options. As Gandhi demonstrated in India, non-violent resistance can succeed. In modern times, civil disobedience, protests, strikes, boycotts and non-cooperation actions have succeeded against domestic tyrants, oppressive systems, and foreign invaders. Historical research, based on real events between 1900 and 2006, has shown nonviolent resistance is twice as successful as armed resistance in achieving political change. The 2004-05 “Orange Revolution” in Ukraine was an example. The current videos of unarmed Ukrainian civilians blocking Russian military convoys with their bodies is another  example of non-violent resistance.

Economic sanctions also have a poor record of success. We think of sanctions as a peaceful alternative to military warfare. But it is only another form of war. We want to believe that economic sanctions will force Putin to back down. But sanctions will impose collective punishment on the Russian people for the crimes committed by Putin and his authoritarian kleptocracy. The history of sanctions suggests the people in Russia (and other countries) will suffer economic hardship, hunger, disease, and death while the ruling oligarchy is unaffected. Sanctions hurt but they seldom deter bad behavior by world leaders.

Economic sanctions and shipping weapons to Ukraine also endangers the rest of the world. These actions will be seen as provocative acts of war by Putin and could easily lead to the expansion of the war to other countries or the use of nuclear weapons. History is full of “splendid little” wars that became major disasters.

Obviously at this point the only sane solution in Ukraine is an immediate cease fire and the commitment by all parties to genuine negotiations. This will require the intervention of a credible, neutral nation (or nations) to negotiate a peaceful settlement to the conflict.

There is also a potential silver lining to this war. As is clear from demonstrations against this war, in Russia and many other countries, the people of the world want peace. The huge, unprecedented support for the economic sanctions and opposition to the Russian invasion could be the international solidarity needed to finally get serious about ending war as a tool of all governments. This solidarity could give momentum to serious work on arms control, dismantling national armies, abolishing nuclear weapons, reforming and strengthening of the United Nations, expanding the World Court, and moving toward collective security for all nations.

National security is not a zero-sum game. One nation doesn’t have to lose for another to win. Only when all countries are secure will any individual country have security. This “common security” requires building an alternative security system based on non-provocative defense and  international cooperation. The current worldwide system of military based national security is a failure. It is time to put an end to war and threats of war as an accepted tool of statecraft.

Societies consciously prepare for war long before the war happens. War is a learned behavior. It requires huge amounts of time, effort, money and resources. To build an alternative security system, we must prepare in advance for the better choice of peace. We must get serious about abolishing war, abolishing nuclear weapons, and limiting and dismantling the military forces of the world. We must divert resources from fighting war to waging peace.

The choice of peace and non-violence must be built into national cultures, educational  systems and political institutions. There must be mechanisms for conflict resolution, mediation, adjudication, and peacekeeping. We must build a culture of peace rather than glorifying war.

World Beyond War has a comprehensive, practical plan to create an alternative system of  common security for the world. It is all laid out in their publication “A Global Security System: An Alternative to War” They also show that this isn’t Utopian fantasy. The world has been moving toward this goal for over a hundred years. The United Nations, the Geneva Conventions, the World Court and many arms control treaties are proof.

Peace is possible. The war in Ukraine should be a wake up call for all nations. Confrontation is not leadership. Belligerence is not strength. Provocation is not diplomacy. Military actions do not solve conflicts. Until all nations recognize this, and change their militaristic behavior, we will continue to repeat the mistakes of the past.