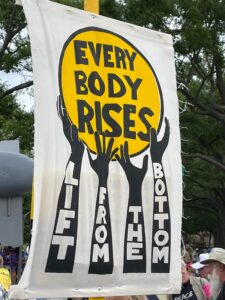 Following a powerful and passionate march and moral assembly of poor and low-wage workers and faith leaders that drew thousands of people from every state in the nation, the Poor People’s Campaign has announced its plans for the midterm elections in November.

The Mass Poor People’s and Low-Wage Workers’ Assembly and Moral March on Washington and to the Polls was Saturday with the U.S. Capitol in the background. People gathered on Pennsylvania Avenue from 3rd Street to 14th Street.

In addition to the thousands in the streets, digital organizers with the PPC:NCMR have tracked hundreds of thousands who watched on social media with numbers from several hundred platforms and cross-posts analyzed. The number is growing as more data comes in.

The seven steps for between now and the November elections include a demand that the Poor People’s Campaign: A National Call for Moral Revival has made several times in the past: that President Biden hold a White House Poverty Summit to meet with a delegation of poor and low-wealth people, religious leaders, and economists and to commit to an Executive Action Plan to Eliminate Poverty in 2022.

They also include a pledge that the PPC:NCMR will launch a nationwide effort to register poor and low-income people to vote and that we will return to DC in September for nonviolent moral direct action. Speakers also called on Congress to vote again on a federal minimum wage of $15 an hour.

During the Mass Poor People’s and Low-Wage Workers’ Assembly and Moral March on Washington and to the Polls on Saturday, Bishop William J. Barber II repeated the demand for a meeting with the president.

“I know the phones work and emails work,” said Bishop Barber, co-chair of the PPC:NCMR. “We demand a White House poverty summit with President Biden, to allow this administration to meet with a delegation of poor and low wealth people, religious leaders and economists — now!”

The PPC:NCMR is merely asking that President Biden follow up to what he said in September 2021, when as a candidate, he told an online gathering with the PPC:NCMR that ending poverty would be a “theory of change” for his administration.”

The June 18th assembly attracted people from across the country. The Washington Post quoted a California man as saying he attended because “democracy is under threat.” A Nebraska man told NPR that it’s “sickening” that people live in tunnels and on the streets in the capital of the richest country in the world. And the German publication taz.de talked with a North Carolina woman who said she’s particularly concerned about higher wages, voting rights, women’s rights and LGBTQ rights.

In addition to the demand for a meeting with President Biden, the PPC:NCMR is launching a nationwide effort to register and educate poor and low-income communities to vote in every election for candidates who commit to a Third Reconstruction agenda.

And we are pledging to bring 5,000 poor and low-wealth people and religious leaders, along with 100 economists, for a nonviolent moral direct action “in our next step of declaration and notification of these demands.”

That 14-point agenda of the Third Reconstruction includes demands for politics, policies, laws and legislation center and prioritize the poor; a federal minimum wage of at least $15 an hour; expansion of voting rights and restoration of the 1965 Voting Rights Act;  equitable and free testing, treating, vaccination and care for COVID-19; and fair taxation on the ultra-rich, corporations and Wall Street.

The agenda also includes demands that Medicaid be expanded and Medicare be protected;  end to homelessness, evictions and foreclosures;  that our government prioritize peace by reducing military spending by at least 10% now and redirecting those resources towards diplomacy, humanitarian aid and the priorities in this agenda; and that the laws, legislation, policies and budgets of this nation are based on the five key principles of the US Constitution: to establish justice, ensure domestic tranquility, provide for the common defense, promote the general welfare and secure the blessings of liberty for ourselves and future generations.