Wisconsin Government Belongs to the People 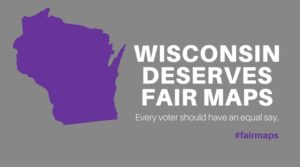 Wisconsin Government Belongs to the People, not to a Political Party. Partisan justices on Wisconsin’s supreme court have approved a formula for one-party control of Wisconsin government. They adopted state legislative district maps that were extremely gerrymandered to favor Republicans. The decision enables Republicans to keep continuous control of the legislature for yet another decade. That control will persist even when a decisive majority of citizens statewide vote for Democratic candidates. That was sadly demonstrated in the 2012 and 2018 assembly elections under the previous ten-year GOP gerrymander. The new maps are reportedly even more extreme than the 2011 gerrymander. They may make it possible for the GOP to gain veto-proof majorities in the legislature. That would allow the GOP legislature to strip away more power from any executive offices that the Democrats may win in statewide elections that cannot be gerrymandered. This concentration of power in its gerrymandered legislature is a project that the GOP has been working on since voters rejected its candidates for all statewide executive offices in 2018. It violates our constitution’s mandate of a separation of powers between three co-equal government branches. Worse yet, the supreme court has laid the foundations for permanent one-party rule in Wisconsin. They did so by adopting a “least change” approach in gerrymandering lawsuits. That means that in the future, if a governor vetoes a partisan gerrymander by the GOP legislature, the supreme court will protect the gerrymander. Rather than meet its responsibility to protect the constitutional rights of the people, the court said its function is to adopt maps for the coming decade that deviate as little as possible from the previous partisan gerrymander. All people, including those who consistently vote Republican, should be appalled by this gut punch to our constitutional democracy. We are appalled by one-party rule and abuse of power in places like Russia, where election outcomes are known in advance. Continuous one-party rule leads to autocrats who will not tolerate dissent. That is not freedom. We must all consider carefully whether we will sit by idly as democracy is dismantled. What can be done about this effort to monopolize governmental power? We must become prodemocracy voters and reclaim our government. There is no longer any excuse for partisan gerrymandering. Today’s technology makes it easy to draw legislative maps that are either hyper-partisan or non-partisan. But this is not a game. It is our government. We must demand a non-partisan process. In this year’s elections, and in the coming years, pro-democracy voters, especially Republicans, must insist that candidates for the state legislature pledge to support non-partisan redistricting. Talking points we hear from Republican legislators opposed to non-partisan redistricting are false or misleading. Non-partisan redistricting was adopted by a Republican government in Iowa over 40 years ago. If there were merit to those talking points, Iowa would have repealed its redistricting law by now. It has not. As a pro-democracy voter, you should withhold your vote from any candidate who refuses to pledge support for nonpartisan redistricting. Even if you agree with that candidate on most other issues. That is because preserving democracy is fundamental to preserving your right to be heard on any other issue. Your voice and your vote already matter much less than they used to with Wisconsin legislators, safe in their gerrymandered districts. Strong majorities of both Democrats and Republicans in Wisconsin favor non-partisan redistricting, but Republican legislators disregard our voices on this and other issues popular with the public. In his Gettysburg Address, Republican President Abraham Lincoln expressed his hope that “government of the people, by the people and for the people shall not perish from the earth.” Our state government does not belong to the Republican Party of Wisconsin. It belongs to all of us.