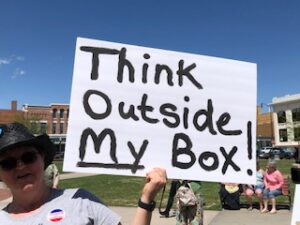 Today I march. I march for the women who blazed the trail before me, giving me the rights, I have. Thank you, you sacrificed so much. I am so grateful. Most of all, I march for my daughter and the girls of her generation and future generations. I march for all women, so you have the CHOICE. I march because we cannot go back.

I was pleased today to see the mix of young and older alike. I was pleased to see men who support women. Citizens who understand we are living in a country that has one of the highest maternal mortality rates, no paid parental leave, and no universal, subsidized childcare. Citizens who understand that someday, someone they love, may need a CHOICE. We all want to see that choice be safe.

What I don’t want to see is a country where a rapist will have more rights than a victim. We are living in a country where Justice Thomas labeled the protests as “tantrums.” No sir, what your wife had at the insurrection was a tantrum, when her candidate did not win an election. To the man who had to show his macho and make jokes to his children about my sign when I was going back to my car, I could have made a quick jab back, instead I asked, “why would you want to teach your children to be bullies?” I believe that said more about him. Denying my autonomy and my equality is about power and control; simple as that.

Abortion is a broad term and does not deserve the negative reputation it has received. What if you found out you were pregnant, but the egg never made it out of the fallopian tube? What if at 20 weeks you learned that the life you were going to bring into the world had developed without life sustaining organs? What about a child who had their virginity stripped from them by an adult she should have been able to trust? What if I told you, it was none of your damn business?