Save the Menominee River 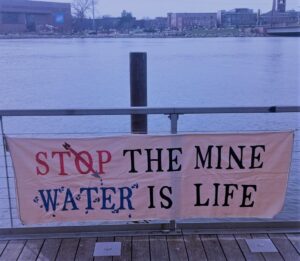 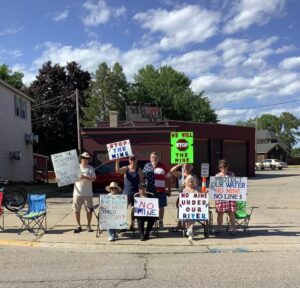 Did you know that the Menominee River flows into the Bay of Green Bay and continues all the way to Lake Michigan? Should we be willing to poison that much water? Our happy PEACEFUL group protested on Friday, July 1,  letting the public know we are always fighting to keep our water safe from sulfide mining. We were approached by a Menominee police officer who was very angry. We took down the sign that we were told was illegal to have attached to a corner pole per his request. We were then told we were not allowed to walk in front of the Ogden Club at all. I’m pretty darn sure we have a right to PEACEFULLY protest on a PUBLIC sidewalk anywhere in this country. We were told we would be arrested for trespassing if we did that. So,  as our rights are slowly being taken away from us everywhere we turn, I’m letting you all know that we will see you next Friday same time, same place, at the Ogden Club, Menominee Michigan from 4-5 PM.

Your help is needed. Pro-mining groups are trying to defeat us with lies.

Stand up against mining companies that want to take away your voice! Stand up for the Menominee River!

We have an URGENT CALL TO ACTION! We are in the PUBLIC COMMENT period, regarding Navigability of the Menominee River.

This designation would give the U.S. Army Corps of Engineers (USACE) oversight of any proposed mining activity on the Menominee River.

and click on the button that says SEND LETTER TO U.S. ARMY CORPS OF ENGINEERS. Please enter your name, address, email, and any personal comments; then click SUBMIT to include a pre-written letter to the U.S. Army Corps of Engineers (USACE), requesting designation of the Menominee River as a “Navigable Water.”