LANSING — On September 23, 2022, the Michigan Historic Preservation Review Board voted unanimously to support the nomination of Anaem Omot, a Menominee Tribe cultural landscape bisected by the Menominee River that separates Wisconsin and Michigan, to the National Register of Historic Places. The vote follows several years of advocacy by historians, scientists, and leaders of the Menominee Indian Tribe of Wisconsin to recognize the cultural and historic resources in the district, including burial mounds, garden beds, and dance rings. 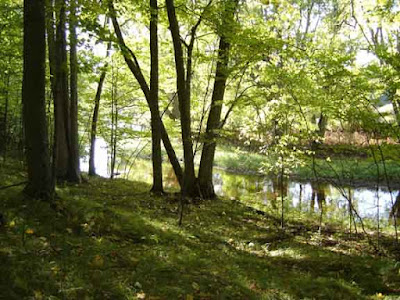 “We are absolutely thrilled,” said Chairman Ron Corn Sr. of the Menominee Tribe. “Today’s vote recognizes a rare and sacred Menominee heritage site that has lasted through centuries of violent dispossession and where Menominee members continue to visit and hold ceremonies today. It’s especially meaningful on Michigan Indian Day, which honors the many contributions that people of Native American descent have made in Michigan.” 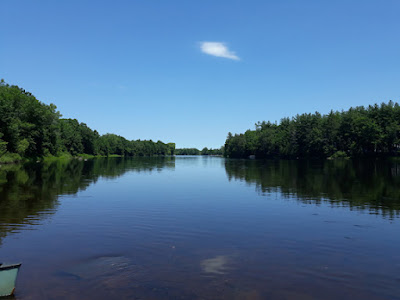 The site contains documented burial mounds, ancient raised agricultural fields, and hammered metal artifacts dating to the Old Copper period. There are also several ancient dance rings in the area, which were used for ceremonial purposes by Menominee and other neighboring tribes. These sites may help historians and researchers better understand how ancient societies were impacted by geological and social phenomena. 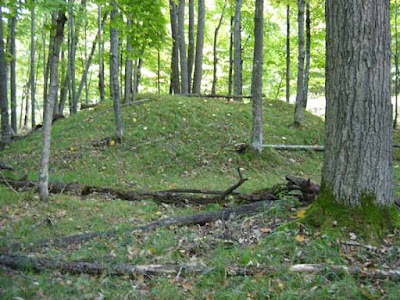 Burial mound located at one of the cultural sites near the Menominee River. (Keweenaw Now file photo) 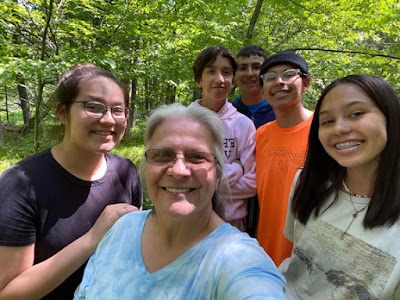 Dawn Wilber is pictured here with her nieces and nephews, who attended the June 29 Ancient Tour along with other students. (Photo © and courtesy Dawn Wilber)

“The way our ancestors lived continues to shape who we are today,” said Dave Grignon, tribal historical preservation officer for the Menominee. “This special place tells us where we’ve come from and where we’re going, and there is a lot left to learn.”

Grignon has worked for years with archaeologist David Overstreet to achieve the historic preservation nomination in both Wisconsin and Michigan.***

The Michigan Review Board vote follows the November 2021 vote by the Wisconsin Review Board, which unanimously approved the site’s nomination. The decision to list Anaem Omot in the National Register of Historic Places — the official list of historic buildings, districts, sites, structures, and objects worthy of preservation — will now move to Michigan and Wisconsin’s State Historic Preservation Officers, the National Park Service, and finally to the keeper of the National Register.

Recent articles in mainstream media have quoted some Upper Peninsula Michigan legislators, proponents of mining, as being opposed to historic preservation of the Anaem Omot cultural site since it is near the site for the proposed Gold Resource Corporation Back 40 mining project — a potential open-pit and underground mine for gold, copper, zinc and other metals. Gold Resource Corporation (GORO) took over development of the Back 40 project last December from Aquila Resources, a company that failed to secure permits for the mine.

These legislators include Michigan State Rep. Beau LaFave (R-Iron Mountain), who admitted his own ignorance of the State Historic Preservation Office (SHPO).

In a Sept. 26, 2022, article in uppermichigansource.com (WLUC, TV-6), LaFave is quoted as follows: “‘After decades of trying to bring hundreds of jobs and millions of dollars into our economy every year, the mine is done,’ said Rep. Beau LaFave (R-Iron Mountain). ‘It is so frustrating because I never heard of SHPO until two weeks ago.'”****

LaFave added the gold mine could operate without disturbing burial grounds.

In that same article, State Rep. Sara Cambensy (D-Marquette) is also quoted as a defender of the mine. She also notes property owners might be impacted: “‘Now people will have to jump through hoops to do anything to their properties,’ said Sara Cambensy (D-Marquette). ‘The mine already has to do a full archeological site investigation when they go for their permitting, but now, this ties in all the other land owners.'”****

A Sept. 27, 2022 article in the Iron Mountain Daily News says the Upper Peninsula lawmakers blame the Michigan nomination for historic preservation on “a Wisconsin-based anti-mining group.”*****

The Daily News article states, “Saying the State Historic Preservation Office has become a block to economic development in the U.P., several lawmakers are planning legislation to defund and reform it, along with a formal resolution condemning recent actions and calling for removal of its staff.”

The Daily News article also notes Representatives Cambensy’s and LaFave’s defense of the mining project and opposition to the historic preservation of the site.

In addition, that article cites state Rep. Greg Markkanen’s criticism of SHPO: “‘SHPO has also caused trouble for us on the trail reconstruction in Houghton County,’ state Rep. Greg Markkanen, R- Hancock, said in a statement. ‘It is urgent that new leadership of this office and the board be had before they hinder other important projects for our communities across the U.P. and Michigan.'”

The article also quotes State Senator Ed McBroom as follows: “‘This action is a flagrant taking of private property rights and opportunities,’ state Sen. Ed McBroom, R-Waucedah Township, said in a statement. ‘Our state entities should not have even considered this non-Michigan group.'”*****

Dawn Wilber, teacher of Menominee culture and language, had this reaction to the nomination of Anaem Omot for historic preservation: “I am extremely happy and proud of those who fought so very hard to protect our Ancestors and our Sacred sites on our original homelands. Those who stood and testified on the importance of this land. Namely David “Nahwahquaw” Grignon and Dr. David Overstreet to name a few. I know there are others, many others, but these two have been amazing in confronting this horrible threat that has been a challenge to our people.”

Mary Hansen, longtime member and administrator of the Facebook Group SAVE the Menominee River STOP the Back Forty Mine, posted on that Facebook page her reaction to the Michigan legislators’ opposition to the nomination: “Gold Resource Corp is at it to STOP Anaem Omot (dogs belly) from being deemed a Historic Site! These people and those backing them are beyond reprehensible! Greed is at the root of their poisonous plan! They can’t grow more money and so they would try to discredit the facts that this area IS a Historic Site! This IS the History of the proud Menominee Indian Tribe! This area and water that surrounds it MUST BE PROTECTED! It must be put on the historic register and deemed a HISTORIC SITE to be protected for all generations to come!”

Al Gedicks, Executive Secretary of the Wisconsin Resources Protection Council and professor emeritus of sociology at the University of Wisconsin-La Crosse, who has worked for years with Native leaders in fighting sulfide mining projects in both Wisconsin and Michigan, and who has written and spoken extensively about the dangers of the Back 40’s projected tailings dam, had the following message for the legislators opposed to the historic preservation nomination:

“Upper Peninsula legislators have claimed that the request for the nomination of the Menominee Nation’s cultural landscape, Anaem Omot, came “from a Wisconsin-based anti-mining group.” (Iron Mountain Daily News, September 27). However, the names that appear on the September 20, 2021, application form are Ron Corn, the chairman of the Menominee Indian Tribe of Wisconsin; David Grignon, the Tribal Historic Preservation Officer; along with Dr. David Overstreet, an archaeological consultant to the Menominee Tribe and John Broihahn, a retired state archaeologist with the Wisconsin Historical Society. This application passed unanimously by the Wisconsin Historical Society in November 2021 reflecting the presence of the Menominee people across territory that later became Michigan and Wisconsin.

“The Sixty Islands (Anaem Omot) location is an ancestral village site of the Menominee Indian Tribe and contains well preserved archaeological features that merit designation as a cultural landscape in the federal Register of Historic Places. The Menominee people occupied the Menominee River area for millennia, until an 1836 Treaty with the U.S. forced them to cede their original territory in Michigan. Now some U.P. legislators want to erase the history of the Menominee Nation by ignoring the voice of the tribe in their application for historic recognition.

“The complaint from U.P. legislators that the historic designation would block the permitting of the proposed Back Forty mine is at odds with the mining company’s own preliminary economic assessment of the project where they state that all sites ‘potentially eligible’ for the National Register of Historic Places ‘have been avoided in the Project footprint along with a 30 meter buffer around the site.’ (P and E Mining Consultants, Inc., Report 329, September 16, 2020 p. 425).

“If the legislators have evidence that the Back Forty project would not protect the Menominee Nation’s cultural landscape, they should provide this information to the public and to the Gold Resource Corporation (GORO).”

In contrast to the argument of these legislators that the nomination of the site for historic preservation comes from a Wisconsin group, the Upper Peninsula Environmental Coalition (UPEC), also supports that nomination. UPEC is a grassroots group that, since the 1970s, has focused solely on environmental issues across all of Michigan’s Upper Peninsula and is a charter member of the Michigan Environmental Council, a statewide network of environmental groups. The following is a statement from UPEC:

“The Upper Peninsula Environmental Coalition congratulates the MENOMINEE Tribe of Wisconsin on the designation of the Sixty Islands as a valuable heritage site by, first, the Wisconsin and, now, the Michigan Historic Preservation Review Board in the MENOMINEE homeland.

“It is unfortunate that Senator McBroom and Representatives Cambensy, LaFave and Markkanen refuse to recognize the value of Michigan’s indigenous heritage. UPEC’s Mining Action Group has documented the damage that a mine adjacent to the river would produce in the form of acid mine drainage and future failure of a proposed toxic tailings dam. Both would degrade the water where the Michigan and Wisconsin DNRs have spent countless hours and funding to restore sturgeon habitat. This mine would make the river less viable for aquatic life. Great Lakes Restoration Initiative funding of over $200 million restored the Marinette and MENOMINEE harbors from decades of industrial pollution to which the legislators did not object. Yet they decry the Sixty Islands cultural site in the river being protected from possible destruction.

“These legislators also ignore the MENOMINEE River as a major draw for fishermen throughout the Midwest, bringing in revenue that supports local businesses that would be adversely impacted by mining activity.

“It is a shame that our legislators do not provide the leadership that encourages environmentally safe development of a fragile wetland habitat. Instead, these legislators jump on any business venture that expresses an interest in coming to the UP, no matter the environmental consequences. ‘Desperation Development’ for short-term gain leads to unwise decisions in supporting a mine that destroys our water. The MENOMINEE Tribe of Wisconsin and environmental groups in both Wisconsin and Michigan have worked for over 20 years to prevent another attempt to pollute our rivers and lakes — pollution that will prevent present and future generations from enjoying the MENOMINEE River.”

*** David Grignon spoke about his efforts to obtain support from both Wisconsin and Michigan for the nomination of these cultural sites to the National Register of Historic Places during the July 23, 2022, Water Celebration to benefit the Coalition to SAVE the Menominee River. See Keweenaw Now’s September 8, 2022, article, “Coalition to SAVE the Menominee River holds Water Celebration featuring Native, non-Native speakers on Back 40 mining project.”

**** See “Menominee River nomination for National Register of Historic Places could impact Back Forty Mine, private landowners.” uppermichigansource.com, Sept. 26, 2022. Rep. LaFave and Rep. Cambensy also spoke about mining during the Sept. 28, 2022, meeting of the House Natural Resources and Outdoor Recreation Committee. During that meeting a package of mining bills was discussed. Rep. LaFave, in one of his comments, referred to the sites nominated for historic preservation as “dirt.” (See about 34 minutes into the meeting.)