Mandela Mash: Using Beer to Break Through the Political Noise 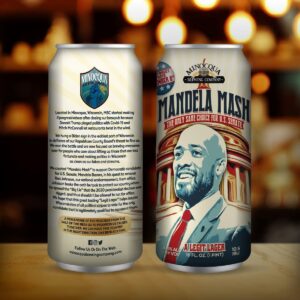 By now, if you live in Wisconsin, I’m hoping you’ve seen our new beer called “Mandela Mash.” We publicized it with a lot of fanfare last Friday, and it’s shipping to stores early next week.

Here’s the tongue-in-cheek ad we posted:

“You’ve waited 12 years for this, but you just didn’t know what the flavor was gonna be.

Nothing has tasted quite right up until now

But now? It tastes JUST RIGHT!

This beer won’t embarrass you in pubic.

This beer comes in an aluminum can, not a tinfoil hat.

This beer was made in America, not Russia.

With a clean finish, the taste doesn’t lie.

Mandela Mash: The Only Sane Choice for U.S. Senate

Call your favorite store today and ask them to stock their shelves so EVERY Wisconsinite, red or blue, can sip this fresh new flavor of American Democracy.”

We’ve made political beer for awhile, but I think “Mandela Mash” broke some new ground. Here’s why:

For those reading who don’t live in Wisconsin, Mandela Barnes is our Democratic candidate taking on Ron Johnson for U.S. Senate this November. Barnes is a solid candidate running against Wisconsin’s national embarrassment.

But because the news media in Wisconsin is weak, our elections are FLOODED with dark money, and the average voter has started tuning out political rhetoric as much as possible for the sake of their mental health, Ron Johnson will STILL be hard to beat this November.

Every 6 years Johnson tries to recreate himself as an avuncular moderate with gazillion dollar ad campaigns, and hopes that this expensive whitewashing will convince the average voter to forget about all the absolutely terrible things he has done and said throughout his terms in office.

I live in Wisconsin, and can tell you that watching TV during election season is painful. EVERY other commercial is this type of historic whitewashing OR a negative political ad, and after a while, we all become numb.

That’s why I focus on billboards, talk radio, and of course, beer cans that act as little mini billboards in every grocery or liquor store. And the cool thing about beer cans is that they contain some pretty tasty beer!

I think our new beer, Mandela Mash, is novel because I’m hoping that voters who have tuned out ALL THAT NEGATIVITY on TV will see this can in the grocery store and be both amused and uplifted. MAYBE they will leave the store with a little positive thought about Mandela Barnes, and MAYBE they’ll remember JUST A LITTLE BIT that Johnson was an accomplice to the largest ONGOING presidential coup attempt in the history of our country.

But we’re not stopping with beer cans.

This beer, Mandela Mash, is a part of a 3-pronged strategy to remind voters how precarious our democracy is in Wisconsin and America. 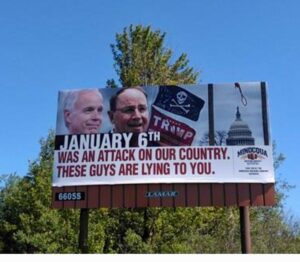 The 2nd prong, to which you’ve collectively donated over $20K to achieve, is to put these billboards up all throughout deep red, rural, northern Wisconsin—where the State Democratic Party has all but abandoned.

These signs have been purchased and will start going up in September if they’re not up already. 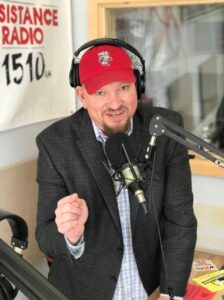 The last prong of our strategy involves rural talk radio. As I mentioned a few weeks ago, we recently partnered with the new radio conglomerate called Civic Media, which is being driven by progressive Madison radio personality Mike Crute.

Crute and his team have made history in Wisconsin by buying 5 rural radio stations in a matter of 4 months, so that rural Wisconsin voters have a chance at hearing the truth amidst the flood of Trump Cult misinformation being slung at them by radio waves currently saturated with conservative misinformation.

Our “Up North Podcast” is being folded into Pat Kreitlow’s Up North Radio program every Wednesday at 10 am on ALL OF THESE STATIONS and we will be airing radio ads throughout the fall to remind voters that the Republican Party has become a dangerous cult of personality.

But for me, none of this is gonna happen until September because I’m going to take a break from politics for the next three weeks to enjoy some of the summer we have left. I’m sure you all won’t mind skipping my long-winded emails for awhile:)

When I come back, I’m gonna ask you for some money to spend on radio ads in Northern Wisconsin. Sorry about that, but until I make enough money selling beer to fund all of these political shenanigans, I’ll need some help. Of course, if you want to chip in now, please do so here.

Thanks for reading, and thanks for helping make Wisconsin a Democracy Again, One Beer at a Time.