July 4, What a Strange Day This Will Be 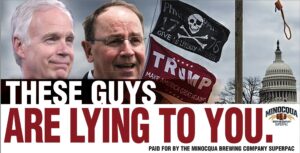 It’s an understatement to say that most of us have to swallow REALLY hard to show patriotism to a country that just overturned Roe, and one in which an entire party is still parroting the “Big Lie” that has been repeatedly disproven for the last year and a half, but most recently by courageous Republican witnesses in the January 6 hearings.

How do we watch fireworks and listen to the “Stars and Stripes” when our country is so sick?

Well, like any good Midwesterner, I’d suggest channeling our innate passive aggression, putting on a happy face, pushing the dirt under the rug, and trying to have a good time–because gosh darn it, fireworks are fun.

But after the 4th, it’s time to fight.

After July 4th, the best way to show that we love our country is to indignantly and righteously refuse to lay down and accept America for what it has become. We must demand that it DO BETTER.

On Tuesday, July 5th, the 2022 election season begins in earnest, and it’s pretty obvious that unless Democrats gain large enough majorities in both houses to kill the filibuster, we won’t have a democracy in 2024 and abortion will eventually be outlawed throughout the country.

That must be hyperbole, right?

No, I don’t think so. SCOTUS just agreed to hear Moore vs. Harper, a case that could hypothetically allow Republican-majority legislatures to appoint slates of Republican presidential electors even if a majority of the people in those states voted for a Democratic presidential candidate–a scenario that would undoubtedly lead to a civil war.

Now I’m going to tell you about how the Minocqua Brewing Company Super PAC is going to do our part to avoid this nightmare scenario, but before I do, I have to say that we regular folks did what we had to do in 2020. We got rid of Trump and elected democratic majorities in both Congress and the Senate.  That HUGE effort should have reaped more progress than it has thus far.

We did our part, but our Democratic Politicians and U.S. Justice Department have not yet done theirs.  They MUST DO MORE. Here’s few ideas of what they should do from a Wisconsin brewer, but Democratic leaders must get WAY MORE creative and leave no stone unturned between now and November.

Until our progressive leaders and law enforcement are willing to do what it takes to right this ship, we on the ground have to focus on ridding America of those politicians who want to burn it down, namely those who continue to advance the “Big Lie” in America.

The Minocqua Brewing Company Super PAC has reserved the following 5 billboard spaces from August until the election in November with this message, but our resources are pretty low after funding the lawsuit that attempted to remove these guys from office.

So far, it’s been $43.60 at a time, from 15,698 of you over the last year and a half, plus a percentage of the profits we make from every can of #progressivebeer you buy.

We don’t need millionaires to make a huge difference in our battleground state, we just need a BUNCH of you “thousandaires” to chip in what you can.

So guys, I haven’t asked you to break out your checkbooks for several weeks now, but it’s time to do it again.  Here’s the link to donate.

Thanks for sticking with us, and for joining in the fight for Wisconsin and America’s heart and soul.

We start tomorrow and give ‘er hell until November, one beer at a time.