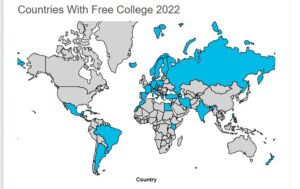 It’s not a student’s fault that the government shifted student loans over to private lenders who started increasing the interest rates on the loans. It’s also beyond a student’s power to determine what college costs. In 1980, the price to attend a four-year college full-time was $10,231 annually—including tuition, fees, room and board, and adjusted for inflation—according to the National Center for Education Statistics. By 2019-20, the total price increased to $28,775. That’s a 180% increase.

Needless to say, the income to be earned with the degree did not also increase by 180%.

Tuition prices alone increased 36% from 2008 to 2018, while the real median income in the U.S. grew just over 2.1% in the same period,  according to data from the Center on Budget and Policy Priorities. Bailout or Investment? Student loan debt

Zane Heflin, policy analyst at The New Center and author of the report titled “The New American Dream: Alleviating the Student Debt Crisis,” says the ramifications of the 2008 Great Recession are still hitting the higher education world, and students are paying the price.

“The two main drivers of the rising cost of tuition are reduced state funding and the incentive for tuition raises as an unrestricted revenue to benefit colleges,” meaning colleges can choose to spend tuition money however they wish, Heflin says. “States and local communities are spending less per student. Someone has to take on that cost, and unfortunately it’s been the student.”[1]

A 2019 report from Center on Budget and Policy Priorities points to cuts in statewide higher education funding for the rapid tuition increase in the last decade.

“Overall state funding for public two- and four-year colleges in the school year ending in 2018 was more than $6.6 billion below what it was in 2008 just before the Great Recession fully took hold, after adjusting for inflation,” the report reads. “In the most difficult years after the recession, colleges responded to significant funding cuts by increasing tuition, reducing faculty, limiting course offerings, and in some cases closing campuses.”[2]

One way or the other, all of us will pay for this outrageous increase in costs for college. One way we’ll pay is to not have access to physicians, dentists, engineers, architects, therapists and counselors, school teachers (happening now), and other professionals who learn what they must know by going to college.

Don’t want to subsidize college education? Schedule an appointment with your friendly plumber for your next dental care.

A second way to address this issue would be for those professionals to charge a lot more when you obtain their services. If you think medical care or attorneys’ fees are high now, just wait until the cost of college means fewer professionals available for your needs AND the higher costs the remaining professionals will charge you.

A third route to address student debt is for policy makers to move past partisan bickering to formulate realistic policy changes regarding higher education. One option would be to remove interest from student loans, or fix it at a very low rate, in order to reduce the cost. It is absurd to allow higher education debt to exist in a marketplace alongside, for example, consumer debt. The need for a new car or a vacation in the Bahamas is far less a priority than the societal need for medical science researchers.

Another option for policymakers would be to reformulate the Pell grant program, expanding the amounts it provides to a more realistic total and allowing the grants to cover graduate school. Perhaps even more critical is the need for government to control the interest rates on student loans. Interest on graduate loans are higher than on undergraduate loans, yet a growing majority of jobs—public school teachers, for example—demand a master’s degree plus regular continuing education credits. Currently, unsubsidized loans for graduate students have a 6.54% interest rate (for the 2022-2023 academic year), while undergraduate students get a 4.99% rate on both unsubsidized and subsidized loans.

The topic again brings up the comparison between the United States and other nations which provide free college. Even India provides free higher education.

But even if compromise is the only way forward, the U. S. needs to develop a plan that does not bury the poorest students in debt. Sliding scale tuition is one idea. There are already Pell Grants, which provide some money for poor students toward the costs of higher education, and expanding those grants to apply to a broader need is a good point to consider. After decades of providing free college, Britain has taken this approach with policies where “students pick up the bill for, on average, around 65 percent of the cost of the education they receive, with taxpayers plugging the gap. More students are enrolled than ever before and those students benefit from more per student funding than the generations that paid nothing for college.” [3]

According to a recent article at online magazine The Best Schools:

“Why is college so expensive? There are a lot of reasons — growing demand, rising financial aid, lower state funding, the exploding cost of administrators, bloated student amenities packages. The most expensive colleges — Columbia, Vassar, Duke — will run you well over $50K a year just for tuition. That doesn’t even include housing!

“…Administrative costs: These costs account for roughly $23,000 per student every year. This is double the amount that Finland, Sweden or Germany — all boasting top-performing education cultures — spend on the same essentials.

“[Yet] professor salaries have barely budged since 1970. According to the New York Times, “salaries of full-time faculty members are, on average, barely higher than they were in 1970. Moreover, while 45 years ago 78 percent of college and university professors were full time, today half of postsecondary faculty members are lower-paid part-time employees, meaning that the average salaries of the people who do the teaching in American higher education are actually quite a bit lower than they were in 1970.”

“By contrast, ‘According to the Department of Education data, administrative positions at colleges and universities grew by 60 percent between 1993 and 2009, which Bloomberg reported was 10 times the rate of growth of tenured faculty positions.’ The New York Times uses the massive California State University system as a case example, noting that between 1975 and 2008, the number of faculty grew from 11,614 to 12,019. By quite a sharp contrast, the total number of administrators grew from 3,800 to 12,183. That’s a 221% increase.”

These increases are driven by greater demand. As society advances with more technological change, fewer jobs are available to those who do not have a college education. Yes, vocational training and trade schools are important, and those programs should be respected and made available as early as high school. In many states, trades like carpentry and electricians are part of apprenticeship programs subsidized and integrated with unions. Right-to-work states suffer the loss.

Finally, it is incumbent on loan and grant programs as well as colleges and universities to ensure that borrowing students receive clear information about their debt. Many financial aid counselors, especially in public universities, fail miserably in providing necessary information as well as making sure that students have a real-world understanding of the debt they’re incurring.

As summarized in Prudential’s Student Loan Debt: Implications on Financial and Emotional Wellness, there is a wholesale lack of understanding of college loan debt among students and graduates: Many student borrowers—53 percent—didn’t know their future monthly repayment amounts. Most—74 percent—were unsure of how long they would be making payments, and 25 percent had no idea whether they had private or government loans.

Those who are outraged by the idea of student debt forgiveness might take some initiative here to help solve the problem. It will take all of us thinking and contributing to the dialogue in order to best serve the future needs of our nation.

Research has drawn a correlation between education level and living longer, as well as indicating that individuals with a college degree tend to be healthier and happier. Other benefits accrue as well. https://www.utep.edu/extendeduniversity/utepconnect/blog/march-2019/the-hidden-benefits-of-earning-a-college-degree.html